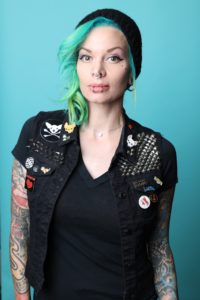 I’m originally from Toronto but I arrived in Los Angeles by way of London where I received classical conservatory training in voice, movement and text study, and excelled at weapons and combat.

I’m not exactly the girl next door, unless you’re the Addams Family, and in that case I’m the toughest, no holds barred, takes no prisoners, most badass girl next door you ever met. Charming too, don’t you think?

Technically I’m a goth, but I look and dress punk rock which can be confusing. However in a post Girl with the Dragon Tattoo world you’ll probably just call me “edgy”.

I’m not in a band but I play the drums badly and the flute exceptionally well. Either way the most important thing is that I look like a rockstar (but I try not to act like one).